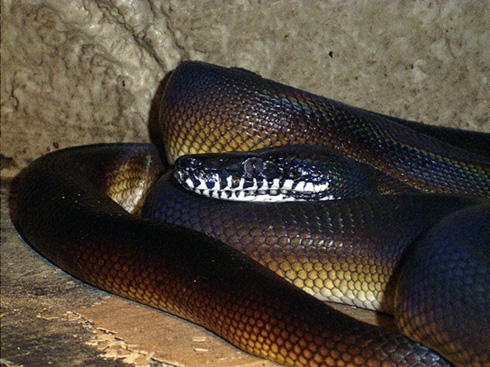 Medium-sized unpatterned python; elongate head and snout; rostral with two to three diagonal pits; nasals with diagonal slitlike pits; one pair of internasals; 12–13 supralabials, first and second or first to third pitted and fifth to seventh entering the orbit, lateral depression dorsally on fifth and sometimes also on the sixth supralabial; 16–17 infralabials, seventh to 12th pitted and in a skin fold; single loreal and preocular scale; usually three postoculars; four to five anterior and posterior temporals; one pair of elongate prefrontals, two to three times longer than the internasals; bell-shaped frontal; two pairs of parietals, anterior ones in median contact but most often not in contact with the uppermost postoculars, posterior parietals sometimes separated by one or more interparietals at median line. Scales are smooth and arranged in 43–51 longitudinal dorsal rows; 262–283 ventrals; anal entire; 65–79 subcaudals mostly paired.

The color of the dorsum is yellowish or reddish-brown to purplish-brown with an iridescence gleam, fading to lighter yellowish laterally, and white ventrally. Specimens from the Sorong peninsula are often lighter yellowish in color dorsally (D. G. Barker, pers. comm.). Specimens from the Fak Fak and Manokwari regencies, as well as from the Madang Province are more brownish-violet dorsally fading to brownish-yellow laterally and white ventrally. The dorsal surface of the head is shiny black with iridescence gleam. Supra- and infralabials are white with black vertical markings on anterior edge of supralabials, reaching into infralabials. Chin is white. Whitish markings on postoculars (sometimes on supraoculars, too) were found in all but one specimen (ZMUC R-5445, Mussau Island). This species also shows physiological color change by turning lighter at night and darker brownish-violet within a period of 20 min during the day (pers. obs.). Pictures of this species in the wild can be found in O’Shea (1996, 2007).

Ontogenetic color change was observed in Leiopython albertisii, but not in Leiopython meridionalis. Hatchlings are uniformly very dark grayish-black in color, including the ventral and subcaudal scales. The whitish spots are absent in juveniles but develop with age and growth. The dorsal color turns into a brownishviolet, and ventral and subcaudal scales turn white in semiadult specimens (pers. obs.). The yellowish color ventrolaterally develops at last.

Leiopython albertisii is a widespread species ranging from Sorong (including Salawati Island) and the Fak Fak regency on the Onin Peninsula to Madang at the east coast of PNG. However, it remains unclear whether the distribution is disjunctive at the southeastern part of the Manokwari regency and along the north coast of the Yapen-Waropen and Nabire regencies. Nevertheless, specimens were collected at the Jayapura regency (Toem, Doromena, Joka and around the Lake Santiani), the Sanduan (former West Sepik) and East Sepik Provinces (on the foot of the Torricelli Mountains, Aitape, Mt. Somoro and Lumi, Wewak, Marienberg) and at the Madang Province (Siar, Madang, and Alexishafen), although no specimens were sighted in the Kau Wildlife area, a lowland rain-forest area near Madang (Austin, 2006). In the Morobe Province, this species is replaced by Leiopython huonensis at the southern Huon Peninsula and by Leiopython montanus around Wau. Reports of the occurrence on the mainland of Australia around Pascoe River, Cape York Peninsula (Ehmann, 1992) remain unconfirmed (Barker and Barker, 1994), as does the occurrence on Aru Island, mentioned by Hoser (2000). Some authors assumed that, in the former case, specimens may have been confused with Liasis fuscus Peters (Kend, 1997; O’Shea, 2007). However, the occurrence of Leiopython albertisii on Normanby Island (McDowell, 1975; McDiarmid et al., 1999) appears dubious because McDowell (1975) had erroneously assigned Bara Bara to the Normanby Island, rather than to the mainland of Papua New Guinea (PNG) at the Milne Bay Province as stated by Boulenger (1898) and Koopman (1982). Nevertheless, just recently, I became aware of a picture of Leiopython meridionalis in the wild from Normanby Island in a White-lipped python group on Facebook.

In general, only little variation in morphological characters occurs in Leiopython albertisii throughout its distribution. Minor differences in the presence/absence and in the number of interparietals were recognized. Additionally, as already stated by McDowell (1975), ventral counts of specimens from the western part of Papua (Birds Head [including Salawati Island] and the Onin Peninsulas) exceeded those found in specimens from eastern Jayapura (near the border to PNG) and from PNG significantly. Nevertheless, no significant variation was found in other characters, but two specimens from the Sorong peninsula (pictures only) were morphologically aberrant from Leiopython albertisii. 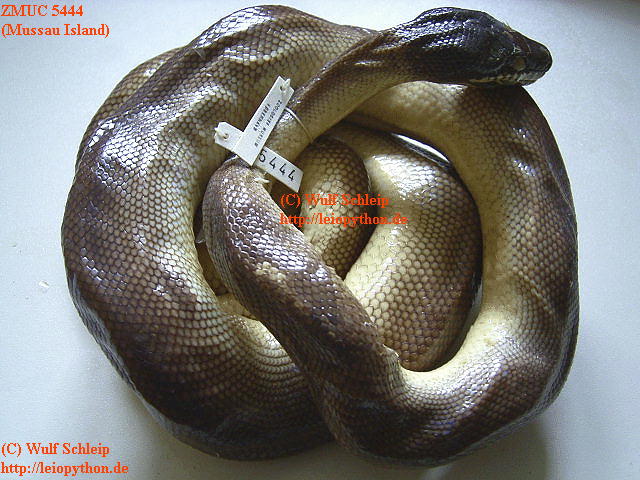 Between 1961 and 1962, the Noona Dan Expedition (Denmark, Europe) collected two specimens (ZMUC R5444 - R5445, female and male) of Leiopython albertisii Peters and Doria 1878 at Boliu on the remote Mussau Island in the St. Matthias Island Group, Bismarck Achipelago, PNG. This island is about 400 miles away from mainland New Guinea. McDowell (1975) was the first to describe these specimens. He assumed that this island would have a relict fauna. Furthermore, he stated that the whitish spot behind the eye is absent in both specimens. The latter is contradicted by my examination of the material, at least in the case of the specimen ZMUC R-5445: 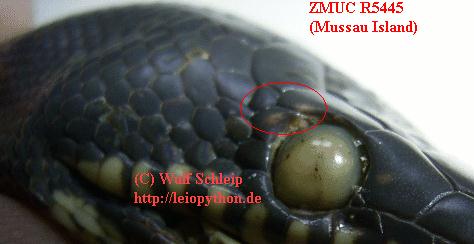 Figure 8: Different from what McDowell (1975) states, there are whitish spots on the postoculars.

Although specimens from Emirau Island, the proximate island of Mussau Island in the St. Matthias group in the Bismarck Archipelago, were collected much earlier than the Mussau Island specimens, these specimens have been overlooked and were first described by Schleip (2008).

Three specimens were collected in 1944 by the ornithologist C. G. Sibley, stored at the Museum of Vertebrate Zoology, California (MVZ 40847–40849).

Specimens of this population are similar to Leiopython albertisii in general appearance. Scale counts are 13/13 (12/12 in MVZ 40847) supralabials, first and second pitted, fifth with lateral depression, fifth to seventh (fifth to sixth in MVZ 40847) entering the orbit; 15/15 infralabials (lower jaw absent in MVZ 40848), seventh to 11th pitted; single loreal and preocular; single supraocular; 3/3 postoculars; 4–5 anterior temporals; 4–5 posterior temporals; two pairs of parietals, both in median contact enclosing a small rhombic interparietal in the center; maximum dorsal scale rows 43–44, ventrals 273–275, anal entire, subcaudals 68–70, mostly paired. The color of the dorsum is light reddish-brown fading to yellowish laterally and off-white ventrally in preservative. The dorsal surface of the head is black.